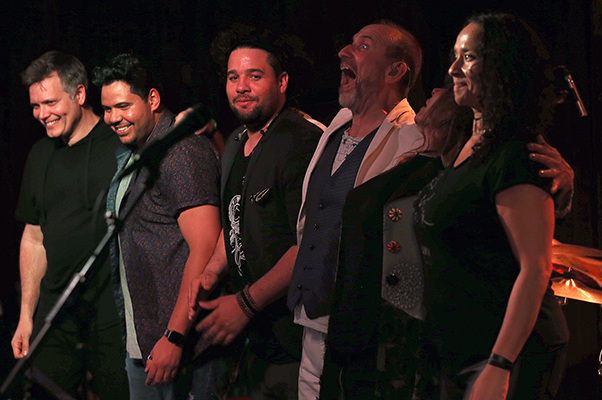 Truely a band with international flavor, featuring the multi-talented Scheila Gonzalez from Guatemala on keyboards, flute, sax and backing vocals, along with added vocals from Peruvian singer and composer Cecilia Noël, in addition to a rhythm section of guitarist SanMiguel Perez bassist Yosmel Montejo (both hailing from Cuba) the diverse ensemble combined with Hay to keep the captive audience in a groove throughout the night at the intimate venue.

The back-end of the show was pretty much a non-stop assault on the senses with an array of hits and fan favorites. Thanking the crowd for not having a panic attack over the lack of Men at Work tracks, Hay proceeded to alleviate any concerns as he introduced “It’s a Mistake,” from 1983’s Cargo, the bands sophomore effort. Written during the Cold War, it’s about what would happen if the arms race resulted in a nuclear war.

Up next, “Who Can It Be Now,” recorded in 1981 prior to the release of their first album, reached the top of the charts in the US a full year later and is perhaps their biggest hit with it’s unique saxophone opening, making it one of the most quirky singles of the new wave era. Nearly four decades after it’s debut, Gonzalez’ efforts lost nothing in translation.

A witty mariachi and flamenco infused cover of AC/DC’s “You Shook Me All Night Long” with Noël (Hay’s wife since 2002) on lead vocals and Hay’s backing was a unexpected delightful treat. “Overkill,” another song from Cargo written by Hay while living in Melbourne about the stress of leaving one’s comfort zone was next.

Finishing strong, the diverse musicianship of the band was showcased yet again on a powerful reggae infused version of their timeless trademark hit “Down Under,” extolling the virtues of Vegemite sandwiches, which quickly segued into a truly frenetic rendition of “Be Good Johnny,” written from the perspective of a nine year old boy who’s constantly being told to behave by his parents who don’t seem to understand him.

A two song encore of the introspective “Waiting for My Real Life to Begin” and 2015’s “Next Year People” remained, but if there was anyone that hadn’t been a faithful follower of Hay and his band prior to entering the venue, their conversion was now complete.