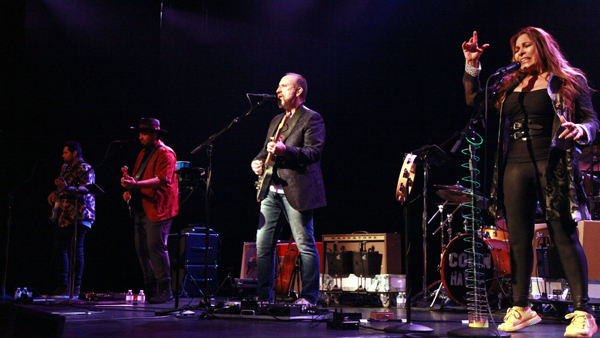 From Down Under, Colin Hay reaches new heights in Tahoe

Colin Hay has a great sense of humor. “I brought a band with me but they didn’t want to come out,” he quipped after opening with an acoustic solo version of “Beautiful World” from his 2002 album “Company of Strangers.”

Hay has lived in Los Angeles for 30 years, but still has that pleasant Scottish-Australian accent. He delighted the Saturday night crowd in Harrah’s Lake Tahoe with outstanding music and humorous stories about his life.

The band did show up and opened with flair as Scheila Gonzalez blasted an amazing saxophone. “That sax just blew your mind,” Hay exclaimed to a front-row patron. The band is quite tight and features Hay’s wife, Cecilia Noel, on vocals, San Miguel Perez on guitar, Yosmel Montejo on bass and Jimmy Branly on drums. The talented Gonzalez also handled keyboards and flute on “Down Under.”

Hay’s singing voice is still as crisp as his days with Men at Work in the mid-1980s. Perhaps quitting drinking has helped. “I quit when I was young. Usually you get a number of good years of drinking in before you stop,” Hay joked. He told the story about writing “Down by the Sea,” the last song on the Men at Work album “Business as Usual.”  “We all smoked this big spliff and it was great. The original version was 4 hours and 40 minutes long!” he recalled.

Read the whole article at https://www.tahoeonstage.com/reviews/concert-reviews/colin-hay-review/