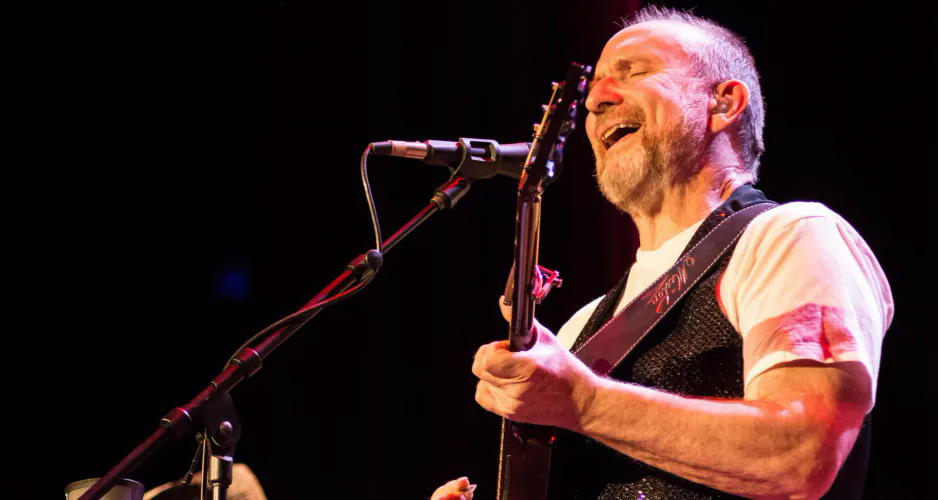 Hay’s relationship with the audience was nothing short of friendly. Between tunes he would tell tales from his career, usually a factoid from his days with Men at Work, cracking a smile with added self-deprecation. Before playing “Down By The Sea,” Colin delightedly explained how the song was written after smoking a doobie of “Sumatran Tripping Grass” with the Men. “We weren’t a drinking band. We were a weed band,” he said before playing into the oceanic jam.

Hay’s report with the crowd remained cordial throughout the night. Even when the fans would blurt out songs titles, he made sure they knew their shouting requests were appreciated, but comically inaudible. The feeble attempts were mostly in vain anyway, as Colin and his band checked off hit after hit from both his solo career and the Men at Work catalogue. “Thank you very much for listening to these songs you probably haven’t heard before,” he commended in reference to his solo material. However, despite his disparagement, everyone knew the words to songs like “I Just Don’t Think I’ll Ever Get Over You” and “Maggie.”

Age does not seem to have affected Colin Hay’s vocal ability or musicianship. He did not stray from high notes and recreated many of the mannerisms and nuances of his material with great ease. Clearly a gearhead, Hay also had a different guitar ready for each song, resulting in perfectly rendered tones that tickled lobes with nostalgia. His wife Cecilia and his band also performed magnificently. Each member was exquisitely trained in their instruments and didn’t let the adoring audience down for a moment. During “Who Can It Be Now?” the crowd exploded as Scheila Gonzales executed the iconic saxophone solo note-for-note. Cecilia added to Colin’s presence with her own flare and affinity for his music, engaging the crowd and dancing with percussion instruments, reminiscent of Stevie Nicks. In the middle of the set, she took over the mic for a Latino-infused cover of ACDC’s “Shook Me All Night Long,” complete with breakdown and flamenco guitar solo from San Miguel Perez.

Men at Work’s “Overkill” was apparently the hit everyone was waiting for, because once the song started, the theatre seats could no longer contain their guests. “What’s gonna happen?” Hay inquired as he encouraged everyone to stand for the “final song,” the mega-hit “Down Under.” At this time, Colin took the opportunity to introduce the band, each member responding with an exertion of talent. “Normally this is the part where we would leave the stage and you all would stand and clap until we came back,” he explained after a particularly energized “Be Good Johnny,” “but there’s nothing back there but a couple of ghosts. So, we’re just going to keep on playing!”