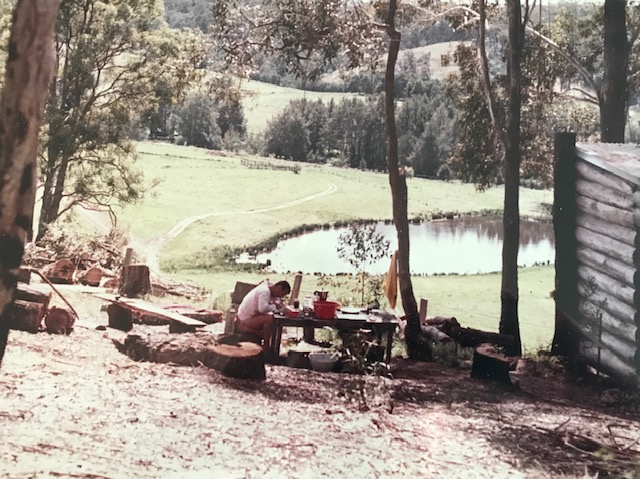 Cobargo lies about 700 kilometers north-east of Melbourne, right on the Princes Highway. I hitch-hiked there once, in 1978, and got dropped off at night at the Cobargo Hotel. I didn’t go in, but the hotel lights gave me comfort. Everywhere else was dark, very dark, except of course for the starlight, illuminating the sky, which was big, open and beautiful. As the engine of the car that dropped me off faded, there was silence, I mean complete silence. Nothing. It was glorious. The bush block however, was still 20 kilometers away, off the Cobargo-Bermagui road. I was going to have to walk, so I set off. As the lights of the hotel disappeared, the only things I could hear were my own footsteps, and my breathing. I had no flashlight, but I could just make out the white lines in the center of the road. They were my guide. I figured it would take me longer to walk the last 20 k, than it had to hitch the 700 odd to get to Cobargo. Suddenly, I was bathed in light from behind. It was a car, not just any car, but a GT Falcon with the round back lights, driving very fast, and going my way. I stuck out my thumb. He screeched to a halt, partly to avoid me, and as it turns out, to give me a lift. He was quite drunk. Very drunk actually, but quite means very in Australian. He was more than surprised to see me on the road. He’d been to the Cobargo Hotel, and done some fairly plucky elbow work, as David Niven would say. He drove furiously fast, I didn’t mind, he seemed to know the road very well. Occasionally he would turn and look at me, and grin. I watched as he sped off, after dropping me at the turn off. Again with the darkness.

I then had to negotiate my way through 50 odd acres of bush, which only had a barely visible track during the day. But I was happy. I had reached my destination of this small piece of paradise, a stone’s throw from some of the most awesome coastline on the planet. As I stumbled through the bush, I heard a noise. I stopped and listened. As my eyes grew more accustomed to my surroundings, I saw, not three feet in front of me, a grey kangaroo just standing staring at me. Unimpressed, he just hopped away. Needless to say, I was ecstatic to make it safe and sound to our small but comfortable tree hut, amidst the spotted gum. Linda was there. We stayed for a couple of weeks. During that time I wrote “Who Can It Be Now”, on that bush block off the Cobargo-Bermagui road. Linda said, “That’ll be your first hit”. And it was. (See photo above)

A lot has happened since then. Cobargo, at this very minute, like so much of southern NSW, and parts of Victoria, is in trouble, big trouble.

I’m about to head out on a solo tour across the US, from February through May. This year is the first time I’m doing what they call Meet and Greets before the performances. People pay extra money to say hi and hang a little before the show. All the proceeds of these will go to the Cobargo Community Bushfire Recovery Fund. Find your show here www.colinhay.com/2019/12/12/colin-hay-2020-tour-vip-upgrades

So, if you’re coming along to a show, and you’re thinking about splashing out for the meet and greet, go for it. And know that your hard earned is going to support a great, honorable and brave organization, made up of people who risk their lives in the face of ever more furious fires.